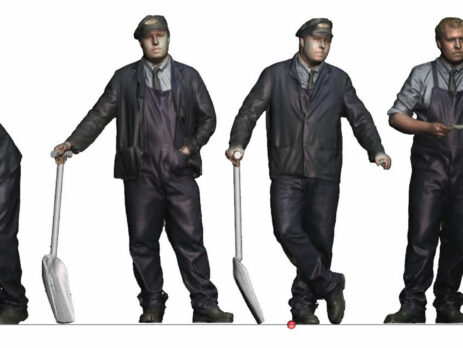 The Modelu website has had a major overhaul to make it (hopefully!) easier to find the figures and place orders. Online orders can now be taken using Paypal, bank transfer or cheques. Later I’ll be adding some guides on preparing the figures, painting and how-to guides for fitting some of the new detailing components such as the Dukedog top feed and sandboxes.

Tom and Iain from Llangollen and Jamie from the SVR have been scanned again, extending the range of steam era figures to include new natural poses. The last of the new scans are being edited and the new figures will be on sale through the Modelu website and forthcoming exhibitions.

At the recent Hornby show I met Jim who works for Colas Rail. He’d arrived at the Modelu stand straight from a shift still in his high-vis to be scanned! Jim’s poses include from Left to Right: Shunt Driver (Class 08), Seated Driver (suitable for Class 60/66/70) and Line Possession/Ballast pose (feet up in the cab of a ’66!).

Jim kindly agreed for his scanned poses to be added to the Modelu range. These scans are my first venture into modern image figures and in the coming months will be expanded to include many other poses. These figures will be available in scales N-O in the next week or so. You can see how Jim got painting himself on RMWeb here. 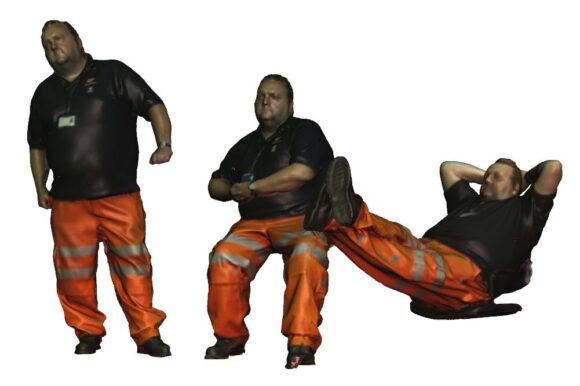 Print to Order and Lead times

Though most OO gauge figures are kept in stock, in some cases they will need to be printed. This is also the case for all larger scales such as S and O Gauge, as a result turn around time for Print to Order items can be up to a week.
Exhibition Scan prints are still on a 4-6 week turn around due to back-to-back shows in September generating quite a long queue for scan prints.

Reorders of scans are possible, if you are interested please drop me an email and I can give you a rough idea of lead times. You only pay for the price of the print and postage, the scan cost is a one off. Reprint pricing is the same as the standard figures costs – see the table here for more information.

I’m slowly beginning to add some of the detailing component designs to the website. These currently include some GWR components such as whistles, top feeds and sandboxes. I’ve many more items in the pipeline such as chimneys and domes and of course the point rodding stools. These are in their final stage of development and will be available via the website next week.

Next show is the South Hants MRC Show in Portsmouth on the 21st November. I’ll be there with stock of 4mm scale figures and the scanning kit. If I have time I should also have a stock of point rodding as well as the display pieces featured in this news letter.